Tilt the world the right way up, the right way up! Okay, so Kwon Sang Seung from Dramajjang nominated me for the World Cup tournament, er, I mean Sunshine Award numerous moons (and suns) ago, which I must stress I’m immensely grateful for no matter how many awards I’ve already received. This is my belated reply, and also the last response for the past award season ~

Ans: Part of the admin wants to organize a luxurious five-day, four-night tour (seriously) to Dramia, Botanical Garden of BCJ, Hengdian World Studios, TVB City and NHK Studio Park for Jen and her family (they can qualify by blogging about dramas someday!), CapriquariusMei, LollyPip and some drama blog owners. Part of the admin just wants to toast with Cha-gun and Shin-gun while sailing toward freedom on a yacht christened Perry Park.

It’s averred that man is not one …. but seven.

• Do you like traveling? Which place has left the greatest impact on you and you would like to visit again?

Ans: YES!!! The lakeside willows in Beihai Park were mesmerizing in the evening breeze. They reminded me of a number of poems.

• Which is the movie that has scarred you gently for life?

Ans: The Eye? They say, though, that some humans are more irksome than ghosts. There’s probably only so much horror cinematic ghosts could induce since they were, if I’m not wrong, largely not the creations of sadistic psychopaths.

• Have you ever converted a person into a drama addict from point zero?

Ans: If you’re one such reader, do let me know!

• Which is the currently airing drama you’re enjoying the most? Describe it in 5 words.

Ans: She Was Pretty! And she’s still the prettiest.

(I think these two statements may be best appreciated after viewing the first half of episode eight, or at least knowing something about the premise. Otherwise, they may read like recs for some beauty pageant. :P)

• Which drama figure you would like to be real in order to meet him/her and why?

• Do you have the same visual fetish with South Korean graves with great view presented in dramas as me? Yes or not and why?

Ans: If I can help it, I would rather not see the depressing sight of another grave or coffin in my life. I do like the burial mounds of the Silla kings though.

• Which is the album, song and/or artist (whether it’s k-pop or not) that has recently captured your attention?

Ans: Unfortunately, I’m too busy with life and dramas to check out the latest developments in the music scene. 😦

• Which is your favorite SLS figure and why?

Ans: Does Perry Park count as a second lead?? I like his cheery nature and the touching back story. No? He’s not?

As a consolation, I got another father figure from among the personalities for an allkpop quiz: 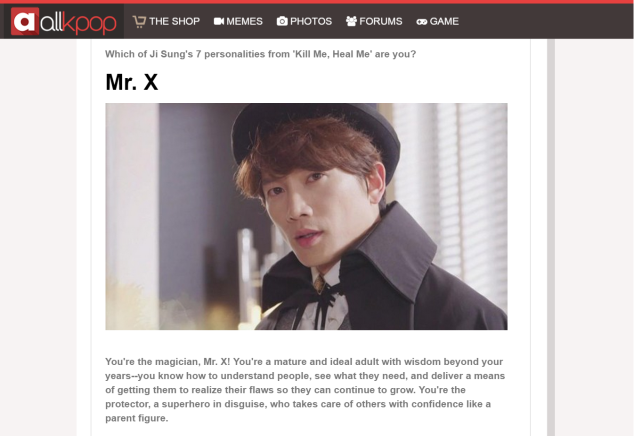 • If you could do anything, just anything at this very moment, what would you do?

• Have you ever thought of an ultra weird scenario you would like to see in a drama at some point?

She Was Pretty championed opportunities for supporting characters to be leads. What if we have a drama whose lead is invisible? It’s interesting to see how our views of a lead may change when we aren’t susceptible to the influence of any kind of exteriors. The only things that may guide our evaluation of her/him would be her/his thoughts, actions and, sometimes, reputation. Sometimes, I suspect that a character has attracted that much fanfare predominantly because of her/his looks (which is not a sin though). Can the audience accept such an avant garde production?

(Highlight the words in the “blank” spaces above to read them. There is nothing related to major plot developments though. This safeguard is only meant for those who do not want any kind of preconception about the show.)

I’ve already listed my nominees and questions to them in my reply to lemonmirae, so the rest of this page is more of a repetition. If you have read them before, you can scroll right to the end of the page for the closing remarks.

There are probably millions of amazing blogs out there. These (and dosirakbento, which admin politely declines awards) are merely the ones that rarely fail to make me smile:

I didn’t expect to be nominated for The Sunshine Award when I wrote my questions for the Liebster Award. Yet those questions were actually quite apt for this new award, so I am reusing/adapting seven questions from them.

1. A golden sunset, the starry heavens, or a starless night sky?

2. Which literary/screen/real-life figures have been most like sunlight to you?

4. A small glint of golden light is emitting from a window at the top of a tall tower. Another is peeking out from underneath a pebble. Yet another comes from the iris of a woman’s eye. One more beckons to you from the bottom of a lagoon. A final one zips past you from the glittery feathers of a swallow darting by. If you must follow one, which source of light do you go after?

5. If there is a novel or drama titled That Autumn, The Sun Slept, what do you imagine it to be about? (And for drama lovers, who do you hope will be the leads?)

6. Do you prefer serving your blog sunny-side up, over light, over medium, over well or over hard?

7. The times of sunrise and sunset can be calculated through the following equation:

where ωo is the hour angle at either sunrise (negative value) or sunset (positive value), φ is the latitude, and δ is the sun declination. All variables are in degrees.

If success or a significant other were a sun, what do you think the equation for the start and end of a challenge or relationship would be like?

While I’m interested to know what you think, there is no pressure to answer the questions or in any way respond to the nominations. There are plenty of legitimate reasons not to participate in such activities, so I fully respect your decision if you choose to opt out. If you answer anyway but find some questions too time-consuming, you are welcome to skip them.

Also, since the award season seems to be over, nominees may like to consider postponing their responses until the next season. I will not bear a grudge if you forget about this nomination by then.

A million thanks to the seven bloggers who nominated me for a total of nine awards!! Let’s hope that 2016 will bring us more squee-worthy dramas to cover! *Deep bow*

*Off to my fishing trip