2015 has been a year of men confident enough in their manliness to be decked out in pink (Bubblegum; Kill Me, Heal Me), actresses proving their dissenters wrong (Park Shin-hye – Pinocchio, Shin Se-kyung – The Girl Who See Smells, Kim Tae-hee – Yong-pal), communicative couples (Pinocchio, She Was Pretty, Hello Monster / I Remember You), female friendships (Angry Mom, Oh My Ghostess, She Was Pretty, Reply 1988, Splish Splash Love) and friends-to-lovers (Bubblegum, The Producers, The Time We Were Not In Love). On the down side, we have come across wave after wave of plagiarism news on the blogging front. Depending on the profit margins, would it actually be more worthwhile to reblog opening paragraphs of blog entries and display links to the full posts thereafter? That would cost plagiarists some ad revenue, but at least they would not need to live with a sword of Damocles hanging over their heads, forever facing the risk of shutdowns by service providers. That more ethical approach is what legitimate sites like GUM: Growing Up Millennial have been pursuing.

Some cheer can be found in more upbeat news like the mainland Chinese television industry winning over the hearts of K-drama bloggers with hit series such as political epic Nirvana in Fire, quirky crime thriller Love Me, If You Dare and spy period drama The Disguiser. Blogosphere crossovers like this are always fun. On a related note, it has been the wish of this blog to bring drama viewers and non-drama viewers together on one site. Hopefully, every post has had something for each group. If not, there is the remainder of this page! Beware: A torrent of topsy-turviness different from the usual tone of writing is coming your way.

miriamfanz from Casual TVB has what sadly sounds like an upgraded version of the Gemino Curse:

“If I were to compare HK dramas to a magic spell, it would be like a magic spell that can replicate things over and over again, except the duplicate’s appearance changes so that people don’t realize it’s actually the same thing.
It’s sad but true that most TVB dramas just follow the same formulaic approach, just wrapped with a different theme each time. Many long-time viewers can probably predict exactly what will happen next in a drama, sometimes down to the exact lines that will be said. Unfortunately, the spell doesn’t look like it will be reversed any time soon.”

Anna from Drama for Real may have spotted a remedy:

“For me, I’d compare the HKdrama, ‘Lord of Shanghai,’ with the Harry Potter spell, ‘Lumos.’ This drama really shone a light on how good or how much better HK dramas could be if they had established, veteran actors take part in them. Anthony Wong’s inclusion in ‘Lord of Shanghai’ really elevated the quality and tone of the drama, and may have even inspired the other actors in it to step up their own acting game.”

“I can’t speak for everybody here but I would nominate Wuxin fashi as a Cheering Charm since that one was original and fun without going too overboard and still being good. Thanks for thinking of us! :)”

Kat from Dramapot is simply spellbound by megahit Nirvana in Fire:

“I’m not familiar with magic spells at all but Nirvana in Fire definitely [cast] a (or many) spell[(s)] on me – whether it’s my inability to keep my eyes off the screen for hours…. or [how] it just completely changed my opinion on Chinese [historical dramas]. I never thought I’d love it so much but at the end of it, I just wanted to watch more! :)”

kipzizz from Dramajjang has this take on a Japanese drama that sounds rather awesome:

“Um, I thought about it and the only thing that comes to mind, is Age Harassment; it’s this year’s drama, where the main character, Emiri Yoshii (Emi Takei) after having had enough of all types of harassment she notices in the place she works, she goes on a speech at the end of each episode, where she addresses the perpetrator of whatever kind of harassment they caused, by a speech that begins with ‘Idiots, I’m gonna fight you tooth and nail!’ They usually go away in the end after they’ve been lectured, so I’d associate Age Harassment with Depulso!”

Also commenting on Japanese dramas, heisui from My Drama Tea thought that the magic spell for hilarious comedy Fuben na Benriya would be one producing a laughter effect. Perhaps Titillando!

Finally, the comment from misscupcakees from A Fairytale World, who spoke for Taiwanese dramas, reminds us that magic does not belong only to the realm of fantasy:

The admin thanks all seven bloggers and the websites they represent from the bottom of the heart. Korean drama bloggers have not been interviewed as this blog is already quite K-drama-centric. Its name was originally supposed to be The K-Philosopher’s Chair. The name “The A-Philosopher’s Chair” was eventually picked to cover some deserving non-Korean dramas as well.

Back in Korean drama-land, a charmed pillow and an enchanted sofa decide to work in cahoots with a certain possessed chair in a college to put their owners through a common TV trope—switching souls! As with tropes, the prank becomes a fad, although goodness knows why and soon, other trios of pillows, sofas and chairs play around with their owners as well. But year-end award ceremonies have to be held, even as each judge is now outside his comfort zone. And the rule of the magic is that each person who leaves his new workplace or contacts his old one before the spell loses its effect on New Year’s Day will permanently stay in his new body! The humans, though, respond to this predicament with mysterious twinkles in their eyes.

Here are the decisions from television producers magicked by the pillows and sofas to the ivory tower:

Ji Sung-joon in She Was Pretty

Choi Siwon in She Was Pretty 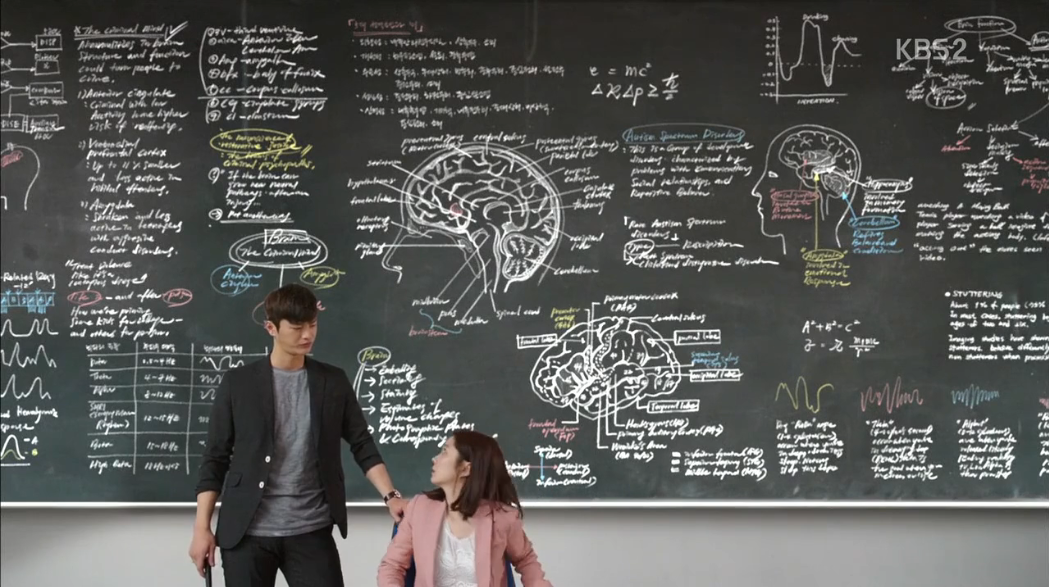 Hello Monster/ I Remember You, Kill Me, Heal Me and She Was Pretty

The Girl Who Sees Smells

Writer Jo Sung-hee in She Was Pretty

Ji Sung in Kill Me, Heal Me

The deans finding themselves in drama-land are up to some tricks as well:

F. Scott Fitzgerald in  Hello Monster / I Remember You

MC Escher in Hello Monster / I Remember You

Pierre-Auguste Renoir in She Was Pretty

Pierre de Fermat in Hello Monster / I Remember You

Pleased with all the meta-drama anyway, the furniture decides to repeat their mischief next year. What they do not know is that their owners are now on their guard ….

But wait, one more prize has to be given out: a special award for a special someone, who complains about suffering behind the scenes for this site. A virtual round of applause!

With that, you have read the last piece of writing in 2015 on The A-Philosopher’s Chair. Now, let us take a really, really deep breath and move forward to an uncertain but fresh new 2016.