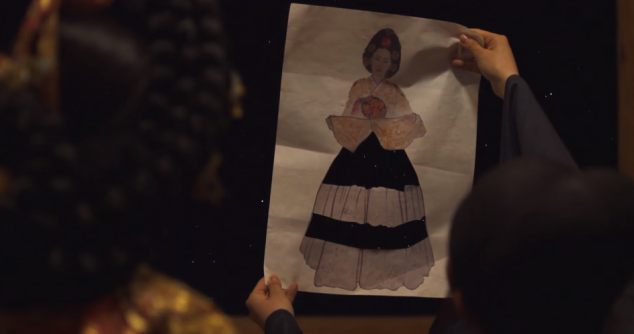 Who broke off jade from the mythical Kunlun mountains
and fashioned it into a comb for the weaver fairy?
After she and her cowherd lover separated,
it was thrown haphazardly on the blue sky.

It is not unusual to depict scenery through fashion. Clones of T-shirts emblazoned with images of palm-tree-dotted beaches or New York streetscapes have plagued subways and malls, after all. Even among high-end fashion labels, there are the Chanel hemline comprising of glittering motifs of the Dubai skyline, Christian Siriano’s evocation of ethereal vistas of sand and water through his pastel–hued prints, Jason Wu’s reproduction of the starry heavens on his diaphanous gown, and more. Jordanian architect and fashion illustrator Shamekh Al-Bluwi, in contrast, is the rare breed who unimaginably accomplishes the reverse.

During a trip to Dubai, Al-Bluwi was inspired to cut out segments of sketched dresses and other womenswear and overlay what remain of the drawings over views of places he visited, such that the features of these places become colors and patterns of the clothing. He then photographed the resulting images and shared them on social media, where they have caught the attention of Yahoo!, Huffington Post and various indie websites. While some of these websites have commended his cutouts for drawing attention to the beauty around us, the significance the works has for art itself is worth pondering too.

Fashion is frequently a form of self-expression, while the appreciation of nature and architecture often carries an element of anthropomorphism. Yet they mostly weave their own narratives, since the qualities of rawness, vastness and so forth that can be found in the latter are not readily replicable in the former, while attributes like the bodily softness conveyed by feathery fabrics are hard to reproduce exactly in architecture. The dazzling stars intentionally or unintentionally suspended on Jason Wu’s gown are not quite the same as the steadfast stars looking down on us in the night sky.

By incorporating natural and architectural elements into fashion drawings, Al-Bluwi has applied to his models visual metaphors for human qualities from those realms. His juxtaposition of the back view of a well-dressed woman with the sleek and towering Burj Khalifa, for example, gives her the iconic monument’s cool and steely elegance. The misty hills that go into another cutout and the electrical lanterns decorating a third, meanwhile, confer upon their subjects an air of serene dignity and dramatic vivacity respectively, with a style of grandeur barely rivaled by ordinary apparel. Fashion designers have filled actual outfits with photographic images of landscapes before, but the grains and sheens of the textiles may have attenuated such qualities by reminding viewers of the images’ artificiality.

In time slip drama Splish Splash Love, the modern-day heroine Jang Dan-bi, who has escaped from her college entrance examination, befriends a young Joseon queen trapped in a loveless political marriage. This subplot makes up only a small fraction of the 140-minute total airtime, compared to the main storyline about Dan-bi tutoring and romancing King Sejong while rediscovering her worth. Nonetheless, it highlights how the struggle for meaning in life and fulfillment of personal potential is an age-old issue blind to class and occupation. One of their fun bonding moments involves the queen disclosing to Dan-bi her interest in apparel design and Dan-bi solving her problem about adding the color of starlight to her hanbok drawing by cutting out sections of the dress and placing it against the night sky. Crediting Al-Bluwi for the inspiration, the producer-director shows us a product that neatly encapsulates the queen’s story in one camera frame: the drawing of a woman lifting up part of her heavy, traditional royal garb to reveal the stars glowing within her.

On a broader level, in terms of portraying fashion through non-fashion-related objects, Al-Bluwi and those he influenced certainly have company. San Francisco-based artist Gretchen Röehrs has been styling vegetable leaves, banana peels, fruit slices, etc. into fashionable pleats, ruffles, stripes and more for her ink figures. Often, these succulent fresh produce seems to endow her little humans with whimsical personalities that have a kind of palpable effervescence the gastronomical world specializes in. Her works have been featured on fashion publications like Harper’s Bazaar and Vogue and include ink and food versions of outfits by Sonia Rykiel, Givenchy and Jason Wu. Interestingly, both Al-Bluwi’s and Röehrs’ boundary-breaking creations could have half as easily been born of constraints. Someone with remarkable aesthetic sensibility but no illustration skill to boast of can print out basic figure templates from the Internet and invent ways to present new fashion on them through sights and materials scavenged from around him. And when circumstances force people to compare two disparate subjects (e.g. fashion illustration and landscapes/food like in the above instances) side by side, they may uncover hitherto unknown connections and synergy opportunities between the pair. What is harder to replicate in the type of achievements Al-Bluwi and Röehrs embody are additional skill sets and/or resources—in their cases, a flair for unique brushwork—that give them an advantage over any unskilled/under-equipped individual attempting the same endeavors. Yet this does not mean that the achievements such an individual may have to settle for are not worth pursuing. Moreover, his advantaged peers may have less need to seek unconventional approaches and do not always become an Al-Bluwi or Röehrs. Perhaps, it would even be apt for them to consciously set constraints for themselves to discover new methods of work and yield creative outcomes more readily—a rather unintuitive way of doing things.

This is not to say that any marriage between two fields would necessarily produce coherent results. The potential pitfalls are many: those attempting this may make ill-founded analogies between dissimilar phenomena, identify false patterns in their eagerness to find patterns, or simply lump the fields together in an unmeaningful manner. Even so, the more considered response would arguably be to proceed with caution, not abandon fusion projects altogether.

All too often, though, constraints themselves intimidate and demoralize people, such that the notion of finding serendipity amidst constraints does not even occur to them. Yet as ideas run dry in aging industries and long personal careers, the boldness to experiment with different sources of inspiration will probably grow more important. We cannot leave all the audacious flights of fancy to children and poets! 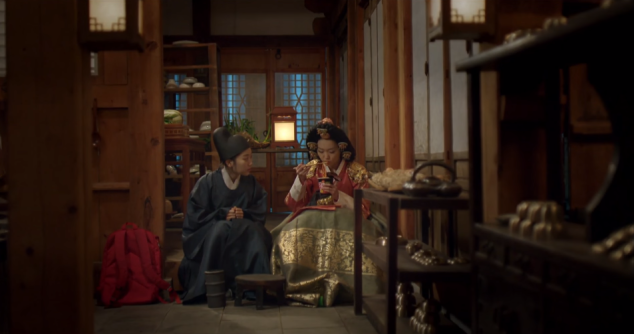