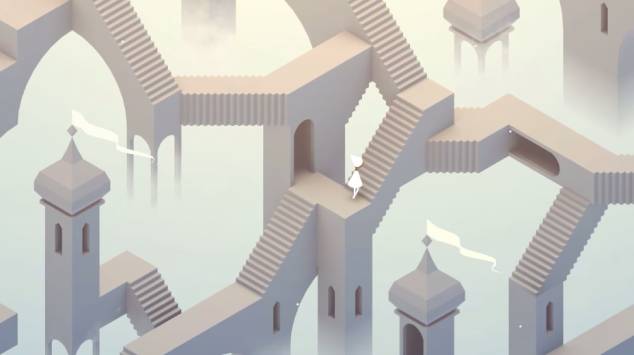 Images of Maurits Cornelis Escher’s high school’s imposing stairways followed him decades after his torturous time as a floundering student there. Being no helpless hamster stuck on the wheel that was the past, however, the 20th century Dutch artist transfigured them and other kinds of stairs into epic landscapes which defy the laws of physics yet tantalize the mind. Nonetheless, art critics, even after his death, lambasted these lithographs and woodcuts for their emotional flatness and lack of aesthetic appeal. Mathematicians, on the hand, gravitated towards his geometrically sophisticated works like moths to a flame, reproducing them in scientific publications, deconstructing them and finding it astounding that they were created by a man who could not understand formal mathematics.

Ascending and Descending (1960), © The M. C. Escher Company, reproduced under fair use provisions.

On the lofty rooftop of his Ascending and Descending, for a start, two lines of identically dressed men with the same mannerisms move in opposite directions on a flight of stairs. Regardless of how much progress they seem to make in each direction, they will arrive at where they start out. Escher pointed out that two stubborn men are refusing to participate in the fruitless exercise but it is only a matter of time before the repercussions of this decision force them to join the herd. One wonders if they should join hands and explore the mysterious stairs at the bottom of the picture instead.

The basic structure of this never-ending staircase was earlier designed and published by British geneticist Lionel Penrose and his mathematician son Roger Penrose, who was inspired by other works from Escher, in an academic journal. In reality, the stairs would have a highest point and a lowest point, which are separated by a gap in the structure. Due to the perspective adopted, though, the viewer not only thinks the two points are connected but also sees the highest point as lower than the lowest point when he examines them side by side. Is it more evocative of a case of sour grapes then? Perhaps, only those who have scaled all heights and plumbed all depths, insofar as doing so does not violate basic decency or neglect personal responsibility, would know.

Another lithograph based on an idea from the Penroses, who were again influenced by Escher’s earlier works, was Waterfall. Here, the waterfall, aqueduct and pillars thrice form the structure of an impossible triangle presented by the Penroses:

Penrose triangle (© Tobias R, modified under the permission of CC BY-SA 2.5). The arrows indicate the directions of water flow in Escher’s uppermost triangle.

Once more, the viewer perceives an impossible structure because he assumes that the perpendicular bars of the “triangle” are connected. And again, it merely happens that two ends of the non-triangular object coincide in a serendipitous fashion from his vantage point to give the appearance of a triangle. In addition, the small stairs on the aqueduct suggest that, contrary to his first impression, the water flows downhill as it moves along the channel. This time, Escher also added two intriguing solid shapes of his own, one consisting of three cubes meshed together (on the top of the left tower) and the other, a star-like structure growing out of a polyhedron with 12 rhombic faces (on the top of the right tower). They ironically make more sense than the harmonious-looking but unrealistic waterfall. Lamentably, the woman drying laundry in his picture may be oblivious to the various bizarre shapes, the impractical perpetual motion machine and the oversized plants below the mill. In good-humored response, however, she would probably tease a scholar for knowing all the mysteries of the heavens and the Earth but having no idea how to properly wash the clothes on his own body. 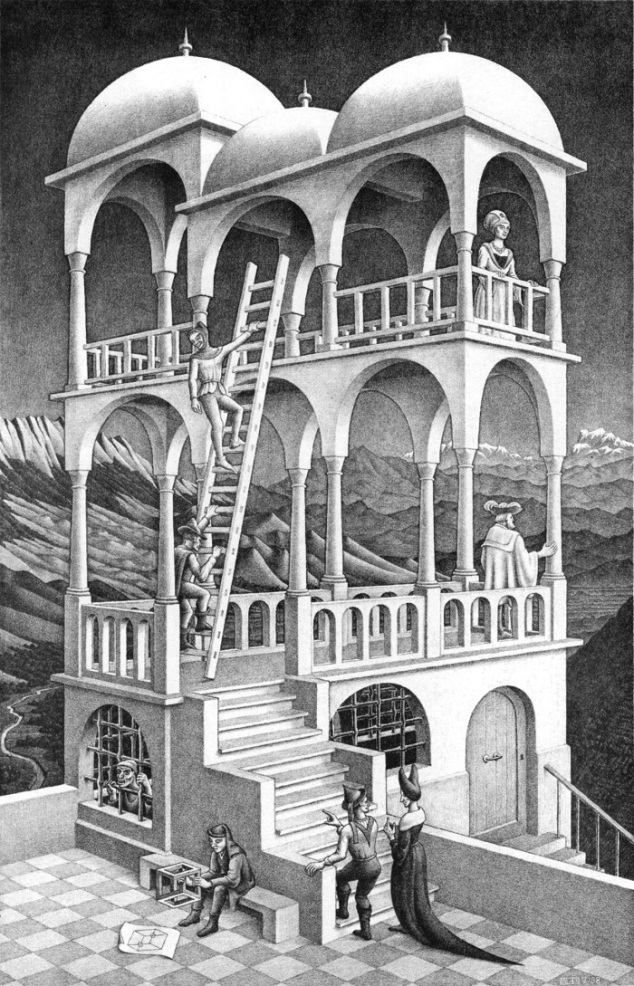 Tricky pillars took the stage in Belvedere too. In this lithograph, six pillars in the middle of a building start out on one side of the structure and end up on the other side, such that a pillar would have its base on the front side and its top end on the rear side or vice versa. As a result, men climbing the ladder linking the top two floors would start off in the shelter of the building but find themselves outside it when they reach the top. Below the ladder, another man, apparently recognizing the problem only when it is presented in a theoretical context, contemplates a cube with beams arranged in the same way as the pillars. In this case, too, things are not what they seem when viewed from other angles. When the impossible cube is rotated, the viewer would probably see that the strange beams, which look straight from the perspective Escher presented, are actually twisted and that some faces of the cube are warped. Alternatively, he might find that some beams are actually broken, with the sizes of the gaps matching those of the intact beams from the illusory perspective.

At the feet of the man with the cube is a diagram of a Necker cube, in which lines corresponding to the problematic beams are circled. Devised by Swiss crystallographer Louis Albert Necker, this line drawing does not require a change of angle so much as a switch of focus. A viewer may see either of the two largest rhombi as the front side of the cube and the other as the rear, leading to two different interpretations. It looks like Escher has overtaken a professionally trained scientist in the imaginative exploration of such front-rear ambiguity. 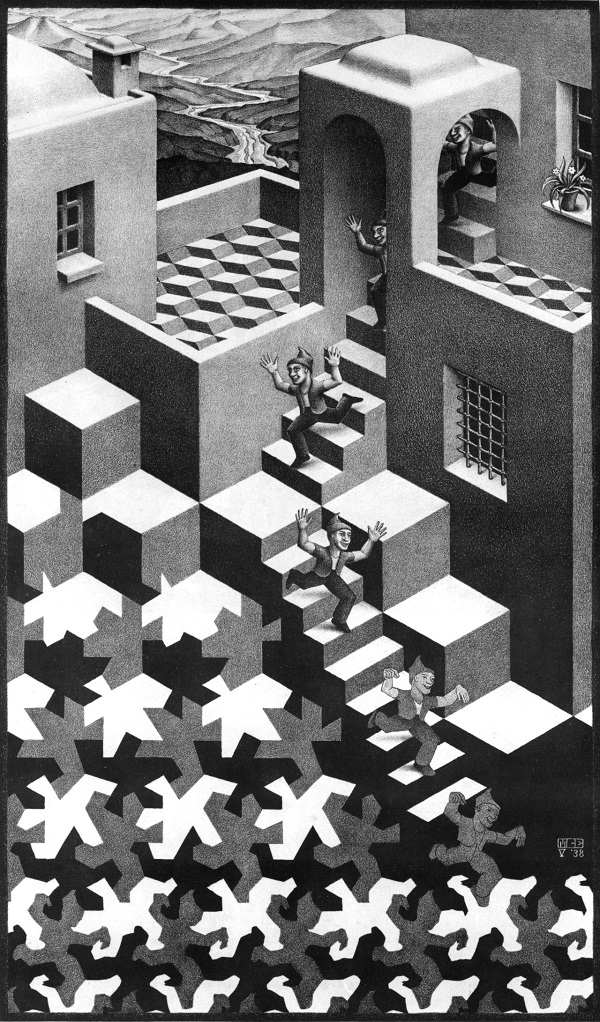 These optical illusions would not have beguiled and then bewildered the mind so readily, if not for its tendency to convert two-dimensional images, which all graphics really are, into three-dimensional objects. Escher was probably already making fun of this habit in an earlier artwork titled Cycle, in which a line of men running down a flight of stairs gradually lose their realism and collapse into flat tessellations, which then float up the building and morph into geometric floor patterns near the top of the stairs. These tessellations form part of a large library of tiled patterns he has constructed ever since he studied Hungarian mathematician George Pólya’s paper on plane symmetry groups, to the best of his ability, and—using self-invented notations—methodically developed his own theory on how shapes can be reflected, rotated and slid across the paper to fill a surface. Some of his discoveries even preceded those of technical specialists in certain respects. And to this day, chemistry experts borrow his illustrations to explain molecular packing concepts.

Escher was no vengeful ex-schoolboy singularly obsessed with satirical attacks on an education system which repeatedly failed him, though. His projects, as evident from the meticulous research on tessellations, often also served as quests to rediscover order in our seemingly anarchic reality. His impossible worlds were, at the same time, about the co-existences of multiple possibilities made visible by art. Nowhere were these accomplished more spectacularly than the print Relativity, which characters go about their idyllic lives side by side even as they are separately held by three orthogonal forces of gravity. Each long flight of stairs, modeled after those in his high school, can be used by people living in two different dimensions. On the top stairway, the result is such that one person can descend from it while another, moving along the same direction and on the same side, can ascend it simply by stepping on a different face of each step. That we cannot witness inhabitants dwelling among us in such parallel universes is possibly only because, as many of the above works demonstrate, we are constrained by the point of view from our dimension. Now that we have seen Escher’s illustrations, though, we need not be deceived by what we see or do not see.

In these experimentations with planes, angles and spatial patterns, Escher was working as a kind of mathematician, except that his language was art. That was in itself another mind-bending feat for someone who, by ordinary standards, was the opposite of Leonardo da Vinci—appearing at home with neither the arts nor the sciences. It contrasts with the ideas in educationalist Ken Robinson’s bestseller The Element, which claims that individuals perform best in areas where their interests and talents overlap. In fact, Robinson’s theory, while enlightening, may be of limited help to two groups of people: (i) those struggling to make ends meet while identifying these areas and (ii) those who have identified them but are constrained by work availability and income concerns.

Escher’s example, on the other hand, inspires us to rethink the meanings of professional disciplines and the connections among disciplines so that individuals originally unsuitable for or lacking passion in their chosen vocations can thrive in them. Steve Jobs broke molds too when, in lieu of direct technical contributions, he brought visual thinking skills to his job and transformed personal computing into an ethereal aesthetic experience. If Escher was a mathematician in the disguise of an artist, Jobs was an artist in the disguise of an IT entrepreneur. Notably, both had the leeway to approach their work from alternative perspectives as one was self-employed and the other, at the top of the chain of command. For rank-and-file workers, this would require the initiative and courage to negotiate with authorities, who, in turn, need to be open-minded and possess a reasonable appetite for risks.

The possibilities are perhaps endless when such latitudes are granted. Imagine a boy who cannot afford to be a musician recreating Maurice Ravel’s Jeux d’eau anyway by encasing legumes and pearl tapioca soup within intricately designed hollow spaces of gelatin and surrounding layers of the gelatin with a moat of broth, in which blobs of spherified food liquids like plum juice and other suitable ingredients are suspended. As the dish is brought out to the customers and as they dig into it, with the contents in the gelatin sometimes flowing across layers and to the broth, the motions and flavors of the constituents play out and occasionally interact in ways reminiscent of the musical piece. Or an urban planning executive lacking in technical or communication skills making up for them with unique insights about odor landscaping he gleaned from his culinary adventures. Or a detective who cannot be an urban planner at all romancing cases the way she would romance cities.

When Cha Ji-an, a slightly clumsy crime investigator in Hello Monster, offered her usually stoic housemate and romantic interest, Lee Hyun, her company and an air pistol for protection, though, he grinned with a half-amused and half-charmed look. She glared at him. He turned somber. Then, shielding his face with a book on Escher and with a chuckle, he fled down the latter’s magical stairs, where truths may be distorted but never for long. 10 thoughts on “The Dream Logician Spiriting Away Stairways”