Hana (left) reconciling with the Robin in Seo-jin (right)

“I think, therefore I am,” proclaimed René Descartes.

The reality of our existence is a topic that has intrigued philosophers across the ages. Whereas Aristotle and his followers accorded great importance to knowledge derived from the senses, Descartes argued that the senses could deceive us even in matters that were most taken for granted. An omnipotent being, he suggested, could be manipulating our perceptions to make non-existent objects and even basic mathematical patterns feel real. The one thing we cannot doubt, though, is our act of thinking, and thinking signifies our existence.

Even so, what exactly does this existence amount to, beyond the presence of our minds? Back in the third century B.C., Oriental philosopher Zhuangzi recounted a dream of himself fluttering about as a carefree butterfly, unaware that he was originally a man. Ever the iconoclast, he wondered if the dream was actually reality and the reality he experienced after waking up the mere imagination of a butterfly dreaming of being a man. Painting a more despondent picture, contemporary scholar Hillary Putnam asked if we are brains kept alive in a vat of nutrients, and all our perceptions electronic pulses a supercomputer sends to our nerve endings, a hypothesis popularized by the motion picture The Matrix.

The irony though is that, as brains in a vat, our understanding of “brains” and “vat” would be limited to computer-fed notions of brains and vat, and thus our language may be inadequate for describing the unknowable situations we are in. So, perhaps, we can only speculate vaguely that we probably dwell in some indescribable hyper-reality different from the reality we perceive. Descartes, nevertheless, defended some of the reality we know by asserting that God, who must exist because he is so perfect that he could not have been a product of our imperfect minds, would not have deceived us about anything. Any misunderstanding on our part, he thought, is a result of our limited intellect. Descartes then made a distinction between knowledge deduced by reasoning and knowledge acquired by the senses (e.g. appearance of objects) or imagination, believing that reality more likely lies in the former than the latter.

In any case, the vast majority of us proceed with our lives as though they are real. In Hyde Jekyll, Me, though, this privilege and its associated peace of mind were not always available to Robin, the secondary personality of a man with dissociative identity disorder. Described by the host personality, Gu Seo-jin, as dreams he forgot after waking up, Robin was a crystallization of the former’s subconscious ideals and born as an escape from his emotional turmoil. From Robin’s perspective, however, the ideas and qualities he was conceived with were his entire world. Throughout the story, he empathized with Seo-jin’s traumatic past but did not personally identify with it. The suggestion that he was Seo-jin mortified him. Yet, even as a successful webtoon artist, Robin could not receive payments, register a web domain or purchase a workspace under the name he knew himself as. To protect Seo-jin’s career as a well-known corporate director, he had to keep his face secret and forsake awards events, leaving a trophy unclaimed.

An air of tragedy hung over the beginning and end of the existence Robin knew. Probably a reflection of Seo-jin’s wish for a warmer family life different from the frigid atmosphere in his chaebol home, Robin remembered growing up in a cosy traditional house with older siblings Seo-jin did not have and a mother who would give him a coin before heading to work every day. In his vivid mental images, he stored the coins in a container buried under an old tree. When his psychiatrist told him that all his childhood memories were illusions, he went to the site and dug frantically under the tree but could not find anything. The house belonged to another family and nobody with any of his family members’ names ever existed. Was he but a figment of another man’s imagination, a symptom of someone else’s illness? Could a fake person like him be loved for real? 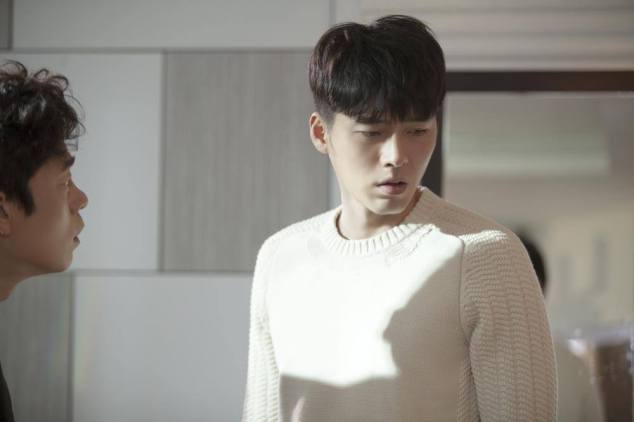 In the eyes of his genial psychiatrist, the answer to the first question was definite. No matter how enchanting, warm-hearted and affectionate Robin was, he was a disease. And a tumor, however beautiful, must be removed. Robin’s generally joyful life, Seo-jin’s later desire to retain him, and their friends’ attachment to Robin did not alter this view. When the end to Robin’s existence was in sight, albeit not as a result of her therapy, he asked her with sad, limpid eyes, “Where do I go when I disappear? […] Do I not have a soul or a body to begin with?” Her only reply was an equally sad look.

Such medical attitudes are backed by many definitions of disease, which refer to it as an aberration from normal physiological or mental functions. In some respects, this distinction between normality and diseased states parallels that between reality and dreams. Normality and reality are the essence of life, whereas diseases and dreams are disposable, if not a must to dispose (imagine never waking up from a coma!). Entities that are normal and real are thought to embody strength compared to the specters that are diseases and dreams. The quest to eradicate diseases is thus similar to the quest to see through illusions—both are mankind’s grand attempts at restoring substance and weight to life. Onlookers tend to regard disease sufferers with pity and, maybe, a feeling of self-superiority. If we are brains in a vat, they are perhaps, to combine the languages of the drama and philosophical literature, “brain tumors in a vat.”

That association of medical conditions with inadequacy and feebleness probably induced the sensation of victory in the drama’s comic villain, a cousin competing with Seo-jin for the position of chief executive officer in their conglomerate, when he discovered Robin’s existence. To his frustration, however, all his attempts to expose this secret flopped spectacularly. For a start, he could not release recordings of confidential psychiatric consultations, so references to formal diagnoses were out of question. Yet, without an official medical label, there was barely anything that could demonstrate a problem with Seo-jin/Robin. Visits to mental health professionals are, strictly speaking, more evidence of proper mental hygiene than concrete signs of trouble. Many people have different sides to their personality, many individuals possess multiple talents, and many modern arts practitioners lead double lives to make ends meet. Both Seo-jin and Robin were also too capable and, of all adjectives, “normal” in their professional interactions to show why they warranted caution. They even learnt each other’s quirks to avoid suspicion. By the time he had the chance to challenge Seo-jin to an on-the-spot drawing in front of reporters, the two personas had already merged. At the end of the day, Seo-jin/Robin’s queer-sounding disorder was really very simple: an inability to remember both halves of his life simultaneously. For hilarious effects, the show presented the cousin with the psychiatrist’s card in the finale, its ultimate comeback to the quintessential drama villain: You, with your obsessive greed and jealousy, were the sick person.

Beyond comedic purposes, though, the sub-plot also provided some serious food for thought: Is not well-being more important than normality? Some disabled and terminally ill individuals, most famously sports writer-turned-educator Hirotada Ototake and academic Randy Pausch, have led rich and meaningful lives with optimism that far surpassed their disease-free peers. Many “ordinary” conditions like fear, envy and resentment, in contrast, lock supposedly healthy people in emotional prisons. As the World Health Organization noted, health is more than the absence of disease—it includes complete socioemotional well-being. Treatment regimes derived solely to return patients to normalcy may miss the larger picture, while the contrasting social attitudes towards diseased and normal states may result in common personal problems getting less attention than they deserve. Psychiatrist Andy Thomson, for instance, recalled the experience of a patient who noted that while antidepressants relieved her condition, she was still married to a horrible drunkard, the source of her pain, and the medication only forced her to tolerate him. While mental illness very often calls for serious medical attention, there is a possibility that in this case, the couple’s woes would have been more effectively resolved by counselling her husband, the more “normal” party.

At the root of the problem with obsession over biological norms and deviations from them is perhaps its detraction from holistic moral engagement with people. In sorting individuals like items in a factory production line, there is the risk of overlooking their comprehensive ethical and emotional needs and reducing them from subjects to objects. Yet if humans were mere thinking machines, as computers are, it would not matter whether they flourish or perish. It is when emotions are invested in them that their existence, even as dreaming butterflies or brains in a vat, is imbued with meaning. After Robin’s memories and traits blended into Seo-jin, the latter remarked to Robin’s girlfriend, Hana, “If you ask me now whether I am Gu Seo-jin or Robin, I have only one answer: I’m merely a man who has loved you, still loves you and yearns for love.” Or as Hana told Robin, in response to his second doubt, before he vanished, “You are real, because my love for you is real.”

I am loved, therefore I am.

16 thoughts on “A Beautiful Tumor”